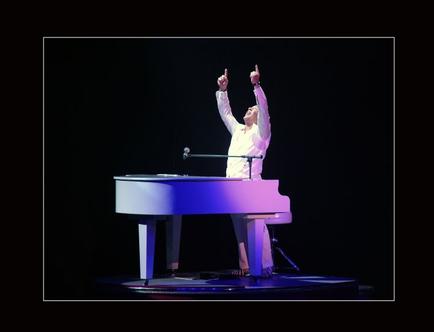 ​​​
This is a description of the keyboard rig that Tony built back in the late '90's:

Frankie Scinta has a unique playing style which lends itself to an equally uniquely wired rig. The setup starts with the piano. Back in the day this was a Kurzweil PC88. The crew managed three of these units - one was in use on stage, one standing-by in the wings, and one in the shop having Frankie's heavy-handed broken keys replaced. These keyboards were in constant rotation. The piano patches he used were mostly acoustic piano and Fender Rhodes sounds. The piano was wired directly to a stereo graphic EQ and was sent to the audio console bypassing any effects and the expression pedal.

Controlled via MIDI were a bank of synth modules which could be brought in with the expression pedal. There were three separate synths which were each wired to a stereo graphic EQ. The EQ's fed a stereo line mixer which was wired to the first two channels of a custom four-channel expression pedal. The outputs of the pedal fed a stereo reverb unit which then fed a pair of DI boxes and then the audio console.

To understand Frankie's playing style one must first consider his older brother Joey Scinta. Before he began his career as a keyboard player Joe was well established as one of the top bass players in Western New York. Joe is an aggressive bass player. In the early Scinta Brothers era they played as a duo and Joe's percussive playing style covered the bass parts and the drum parts as well. That left Frank free to play an additional lead synth with his left hand. Traditionally players play the piano using the left hand for the bass and the right hand for chords and for playing lead lines. They also commonly play 'make-shift' chords with the left hand in order to play lead lines with the right. Frankie's unique style affords him the opportunity to continuously maintain the same part with the right hand while playing lead parts and solos with the left.

The keyboard rig ultimately fed six inputs on the audio console as follows:

The combination of the sounds from the three stereo synth sources along with the sounds from the lead synth could be simultaneously brought in to the mix using the expression pedal and the action of a single foot. This would allow for a myriad of voicing options which could accompany the static and unchanging piano sounds. Orchestration such as string sounds could be brought in at anytime. Big band horn stabs were among the most realistic. He'd start with the sounds which via MIDI control would follow the chords he was playing on the piano, he'd then add complimentary voicings on the lead synth with his left hand. All while percussively working the volume pedal who's four outputs were fed pre-reverb. This kept the verb tail from being cut by the action of the expression pedal.

Tony had logged over four hundred fifty shows in his tenure with the act. He considers the design and construction of this keyboard system the most rewarding accomplishment of that time, all driven by one musician's unique playing style. This rig has since been retired in favor of current technology.  Along with the addition of veteran  Scintas drummer Peter O'Donnell, a world-class musician in his own right, many of the synthetic sounds have since been replaced with live musicians including a horn section.

Note:  Joseph Anthony Scinta contributed to the overall design and Frank Quebral built the lightweight Baltic Birch racks which when fully loaded weighed in at under 100lbs each.  This allowed them to be flown by the airlines as luggage rather than freight.