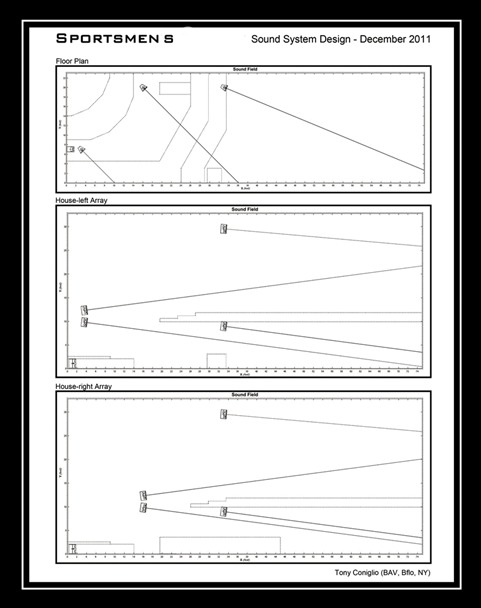 In late 2011 at the suggestion of Beverly Bolam Tony paid a visit to his old friend Dwane Hall at his club 'The Sportsmens'.  Just as Bev had indicated this place is impressive.  They nearly gutted the three story house on Amherst St and added over a half a million dollars in structural steelwork to accommodate the capacity crowds that the music hall would attract.  The Sportsmens has existed as a local tavern under the same name and at the same address for over 100yrs.  This renovation put it on the map as a national concert venue.

Obviously missing from the venue at that time was a sound system capable of covering the audiences that were sure to attend.  Back in 1977 Dwane (then 25yrs old) had given Tony (17yrs old) his first ever full time job as sound engineer for 'The Stone Country Band', a gesture for which Tony has always felt a great deal of gratitude.  As a way to pay Dwane back for his confidence and good will, Tony offered to design a sound system for his club.

A few days later Dwane came by with blueprints and his construction plan.  Over the next two weeks Tony transferred the lines on the drawing to his sound system design software.  In December 2011 the design was complete.  All that remained was the funding required to make the design a reality.

In early 2012 Tony, along with good friend Mark Stadler (majority owner at BAV), attended a performance at The Sportsmens by Sara Lee Gutherie.  While at lunch a few days later Mark commented about how much he appreciated the effort that Dwane had made on the design of his venue.  Tony used the opportunity to suggest to Mark that he invest in the sound system design that he had for the club.  In a few days Mark began offering ideas as to how they might go about making the plan a reality which included his own generous financial support.  A few weeks later with nothing more from Dwane than a handshake they began the installation and just a few more weeks it was complete.

The design has received critical acclaim.  Audiences & entertainers agree that the sound at The Sportsmens is excellent.  Comfortable in the house and on stage as well. 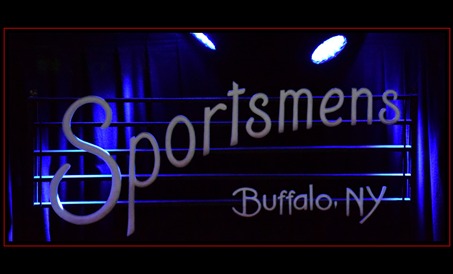